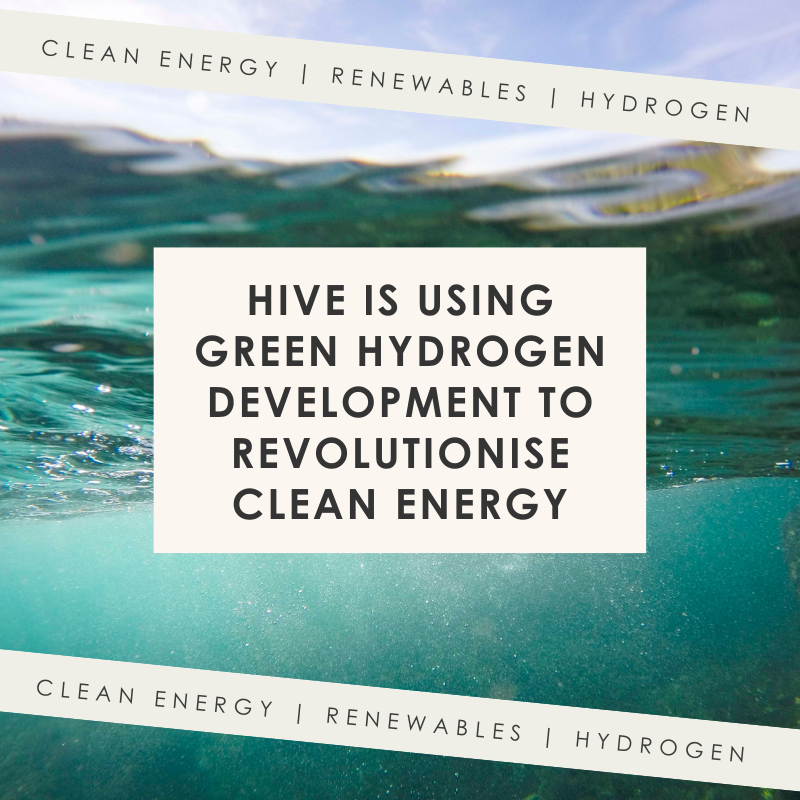 Following Hive’s success with solar projects since 2010, we are expanding our portfolio to include green ammonia and green hydrogen development. Our mission is to create a greener and sustainable future. We are contributing to decarbonisation, and we want to be part of achieving the global transition to net zero.

Hydrogen is a common element in the universe, but unfortunately it doesn’t occur naturally in its pure form – usually you find hydrogen as part of materials including water and minerals. So, to use hydrogen as a form of energy it must be extracted. Hydrogen is already being used as a source of energy. Hydrogen itself is emissions-free, but it takes a lot of energy to make it. At Hive, we are fully committed to using the power of water, sun, wind and innovative technologies to create the dedicated renewable energy to produce the green Hydrogen whilst focusing on improving the overall system efficiency.

Common techniques to extract hydrogen are referenced by colours. Brown and black hydrogen produce hydrogen by using coal and other carbon-intensive materials, meaning it is typically heavy in emissions, causing damage to the environment. Blue hydrogen is less damaging than brown, using ‘steam reforming’ in the process to separate hydrogen from natural gas. Lastly, there is green hydrogen. The process to generate green hydrogen is emission free and uses an electrolyser process, to split water into hydrogen and oxygen, powered by renewable energy. At Hive, we’re only interested in green hydrogen as a completely greenhouse gas free source of energy.

What is the benefit of green hydrogen?

Green hydrogen is 100% sustainable and will play a vital role for Hive in the renewable generation integration, energy storage, smart grid transformation as well as the decarbonisation of those hard-to-abate sectors. The production process doesn’t emit pollutants and the hydrogen and hydrogen-based downstream products can be used in a variety of applications. The list of benefits is extensive for green hydrogen development.

Also, there is a massive surge in demand for hydrogen and ammonia across the globe. Capacity and development need to be increased to meet agricultural, chemical, and industrial users requirements reducing their reliance on fossil fuel. This, together with the future switch to green ammonia as the main fuel in the maritime industry and for coal substitution, makes this the perfect time to invest in this commodity. Moreover, Hive is also investing into technologies supporting the hydrogen midstream development.

We are beginning to develop H2 projects combined with Solar PV and Wind generation across the globe. We’ve been working on green hydrogen and ammonia since 2019, and our first green ammonia project is to be based in South Africa. In December 2021, we announced plans to construct one of the world’s largest green ammonia plants alongside Built Africa.

As well as Africa, we have developed a huge green hydrogen pipeline in Spain. Currently, the pipeline for H2 in Spain is at a variety of different stages with the first green hydrogen and ammonia project being launched in Q3 this year – producing up to 250,000 tons of green ammonia. Earlier this year we also announced our plans to work with Fusion Fuel to utilise its innovative and patented technology for green hydrogen development in the country.

On top of Africa and Spain we are working on green hydrogen development in Brazil, Chile, Argentina, Greece, Turkey, Zambia, and Canada.

If you’d like to find out more about our green hydrogen mission or projects, use the button below to contact Shirvine Zhang, Head of Hydrogen and Hybrid Energy.