5 reasons we need to restore nature 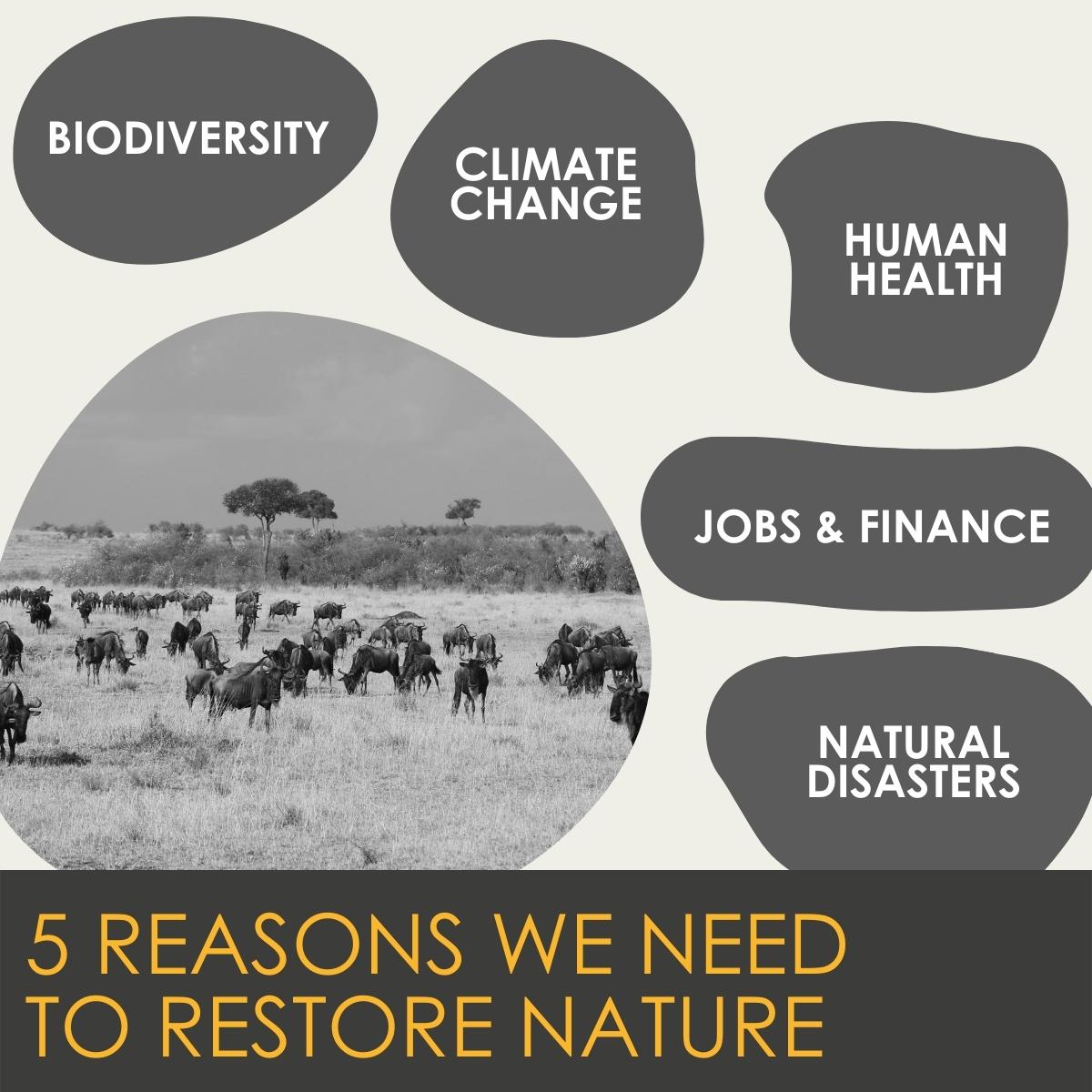 In South Africa our Hive Ecosystems team is planting spekboom plants (a type of quick-growing succulent) across over 7,000 hectares of land. We’re working alongside local farmers and landowners to rehabilitate areas with natural vegetation to create a productive area for agricultural use.

We have land in South Africa which has previously been degraded and depleted of carbon, nitrogen, and minerals from years of intensive overgrazing and farming. Hive Ecosystems is planting millions of spekboom plants across the land to rewild the natural landscape and nurture carbon from the growing foliage.

Of course, we all want a planet with a clean and prosperous future. Having extensive areas of land degraded is bad for both landowners and farmers, but the impact goes further. Biodiversity is impacted – meaning we are losing species of plants and animals at an alarming rate. Climate change is causing devastation (such as massive wildfires) – which would be reduced if land was maintained and healthy. Human health is at risk – we are seeing more diseases due to lack of natural habitats, and we require nature for a vast percentage of our modern medicine. Jobs are being cut back – industries including tourism and agriculture are being lost. Natural disasters could be reduced – the same principal stands for climate change, nature is a fantastic defence in some circumstances, but with less nature to protect us, more damage is being done.

Here are the top five reasons we need to restore nature:

We all want to live in a world full of nature and wildlife. However, the IPBES 2019 ‘Global Assessment Report on Biodiversity and Ecosystem Services’ was clear evidence that humanity is causing a devastating impact on wildlife. A few examples of changes to biodiversity:

– 1/3 of the world’s topsoil has been degraded

– 32% of the world’s forest area has been destroyed

– More than 85% of wetlands have been lost

– 50% of the world’s coral reefs have been destroyed

These statistics show that we are already experiencing tragic loss of nature and biodiversity across the globe. If we continue to degrade land at the rate we are, we could lose more species of plants and animals. Biodiversity impacts more than just the wildlife we share the planet with, but we will go into more detail about that below.

Nature helps offset humans’ emissions. With the substantial emissions we have been contributing to our environment since the industrial revolution, we depend heavily on nature to offset some of the damage. For example, grasslands absorb around 343 gigatons of carbon dioxide (the equivalent of about 19%) from the US electric power sector. But it’s not just the planets, oceans also absorb co2. Research shows that up to 25% of all the carbon dioxide we generate is absorbed into the ocean, rather than further polluting our atmosphere. The oceans also help to regulate heat, absorbing over 90% of excess heat since 1970.

Biodiversity is responsible for human health. Many vital medicines require plants for manufacturing, in fact, up to 25% of modern medicines have ingredients derived from plants found exclusively in the rainforest.

Zoonotic diseases spread more easily with limited land and habitats. With almost 3 in 4 infectious diseases originating from wildlife, it is important to keep wildlife as wild as possible. With the continued degradation and deforestation happening across the globe, animals are continually forced to reside in closer proximity to humanity.

As well as physical health impacts, mental health is significantly improved in areas with greater biodiversity and nature.

A recent report found that more than half of the World’s GDP is highly dependent on nature – a total of around $44 trillion. Biodiversity underpins nutrition and food security across the globe. All countries have indigenous produce which require specific conditions to grow. Food security and agriculture across the globe relies on suitable growing conditions and with on-going changes to the weather, farmland will become less viable.

One example of this is crops including wheat, corn, and rice. These crops account for almost 60% of the total plant-based products consumed by people and without the appropriate conditions will fail to thrive. Not only would the reduction in crops pose a negative impact on human health (with a significant percentage of people facing poverty if crops fail) but farm owners would have their whole livelihoods compromised.

There are also natural areas that bring in tourists, accounting for a significant percent of income for cities, towns, and even overall countries. For example, coral reefs represent around $36 billion a year in economic value. Considering we have already destroyed around 50% of the global coral reefs, we’re risking an important portion of the global economy.

Natural solutions are superior defences against natural disasters and support restoring areas following such events. Floods, storms, and droughts aren’t as damaging when there is a resilient nature-based solution in place. Research has shown that forests and plants capture significant amounts of excess water, which is an ideal solution for areas subject to flooding.